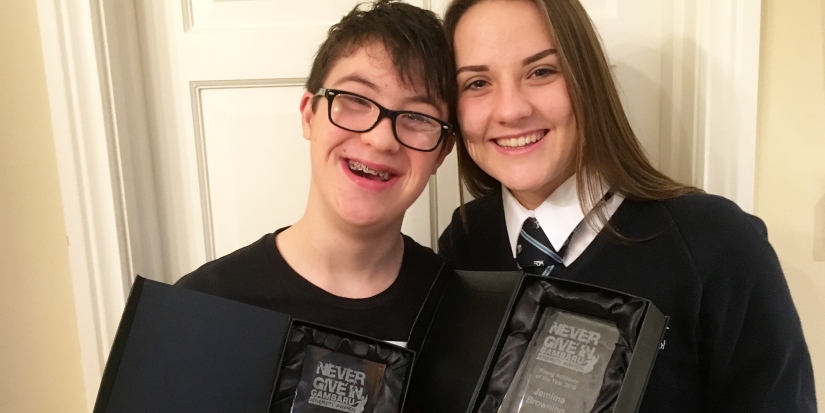 Siblings at Tadcaster Grammar School were recognised for their amazing achievements and their contribution to the Community at an Awards Ceremony held recently.
Will Browning, aged 14 and his sister Jemima Browning, who will be 16 this month, were delighted and surprised to be presented with trophies, £75 in vouchers and a personalised gym kit at the Adversity Awards held at the Old Swan in Harrogate which was hosted by Gambaru gym.
Will received an Adversity Award for his achievement in swimming and his swim squad won Community Team of the Year. Jemima won Young Achiever of the Year and her award was presented to her by the CEO of North Yorkshire Sport. “To receive the Young Achiever of the Year Award was an amazing surprise,” said Jemima. “I really did not see it coming and the whole evening was a truly uplifting experience,” she added.

Further exciting news for the Brownings too as, through their involvement with Play Unified, they have been appointed to be on the European Youth Activation Committee to represent the Special Olympics in Great Britain. The four teams from Bosnia and Herzegovina, Cyprus, Serbia and Great Britain will work together for the next two years to bring the youth strategy in the region forward. They will create, develop and implement youth activation plans in their countries in strong collaboration with their National Program. Furthermore, they will serve as examples of youth activation for other programs who want to develop and benefit from their experience in this area.
“This is the most amazing and exhilarating news I have ever received,” said Jemima. “To be told that my brother and I have been chosen for such an honour was unbelievable. I look forward to the opportunities it will not only give Will and I, but also the young people who are part of, or who wish to be part of the Special Olympics in the future,” she said. “I am extremely passionate about giving everyone a voice and am honoured to be able to represent the interests of young people within the context of the Special Olympics.”